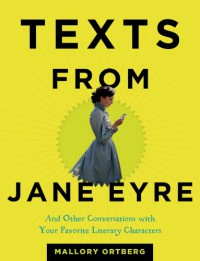 I was not expecting much, really. A few cheap laughs at some classic literature was all I wanted. It didn't have to be hilarious or anything. I don't think I laughed once. I might have smiled a few times?

Some of the stories were almost unrecognizable to me, including the ones I have read multiple times. The text message format made it worse. Some of them were perfectly fine, what I would consider to be "normal" text messages. Some of them were almost incomprehensible. I text quite a bit--I shouldn't have had this much trouble. Some of the characters weren't just flanderized; they bore absolutely no resemblance to the characters I had originally read about. If there hadn't been labels, I would have had no clue what was going on.

The idea was brilliant, but this wasn't as much fun as I hoped.