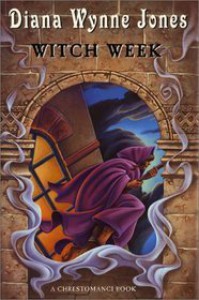 I was a child the first time I read this, and although I couldn't remember the name, it made such an impression on me that I spent a (probably horrifying to the librarian) ridiculous amount of time trying to track it back down after I read it the first time. This was done primarily by informing her it was pink and about witches. I'm sure she was pleased with all that information I could give her, but bless her, she did manage to track it down for me eventually.

This is very much an English boarding school book, not just because it is set there, but because it embraces the good and bad bits of that. The universe is just a little bit different than ours, certainly, but there are quite a few things that remain the same in the way children behave to each other.

The main characters (we get the viewpoint of several of the children) are not always the most charming of creatures, and they certainly have their flaws, but it is hard not to root for them given the situations they find themselves in and the universe in which they are forced to reside. Witch burning continues, and being discovered as a witch carries a death sentence. Not a pretty place to grow up when there are notes accusing someone of being a witch.

All of the characters do manage to come to life, though even the "heroes" of the story are occasionally annoying. They all feel quite British (at least to a Yankee, so take that with a grain of salt) and the world building is well-handled and makes the story shine.

The ending is probably my favorite bit, and I'll not spoil it, just say that it is rather remarkably complex for a book aimed at such young children and introduced me to several new ways of looking at the world when I was young.

This was a childhood favorite, and thus I am probably prejudiced, but re-reading it was still a pleasure and it's worth checking this out if you're a Diana Wynne Jones fan or if you think you might want to be.