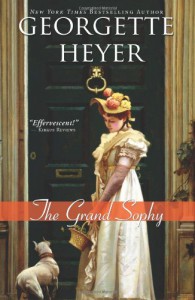 This is not my favorite Georgette Heyer book (Cotillion still holds my heart, I'm afraid), but her books are remarkably readable and fun and this was definitely an enjoyable romp.

Regency romances (and this is, although that is probably not really my favorite part, a Regency romance) and I have a curious relationship. They are one of those genres that I tend to like the idea of more than the actual result. Some of it is my curious relationship with the whole romance genre (I like, and often even require romance in my books, but generally heavily mixed with something else), and some of it due to the fact that Jane Austen kind of holds the title for the genre, and very few things really manage to hold up in comparison for me.

Setting that minor digression aside, The Grand Sophy was charming, and a large portion of that was due to the main character. Sophy is one of those characters you want to see succeed at whatever she is currently turning her hand to. She's outrageous enough you completely understand London being turned upside-down simply by her existence, but despite a bit of a temper and maybe just a soupçon of bossiness, she genuinely has people's best interests at heart, even when she seems not to, and watching her arrange things to the satisfaction of herself and those she loves best is a remarkable venture.

I did see pretty early on where this was actually going in almost all respects, but the journey itself was worth every moment. People are in love who shouldn't be. People aren't in love who should be. Good people deserve a happy ending and bad people don't. It's relatively basic fare, but it's all handled with a style and panache that makes you genuinely like the characters and thus care about their ends.

I think this book may have sent me rushing back into a Georgette Heyer mood, and I don't regret that a bit. I've heard this book described as one of her best, and I can absolutely see that.